The Right Chemistry for a New Corporate Center

In December 2015, the news broke that two of the world’s biggest chemical companies—Dow Chemical and DuPont—were planning a merger. Finalized on August 31, 2017, the merger made DowDuPont the world’s largest chemical company. It also meant a major reorganization of corporate functions, something that would have stretched Dow’s existing small-town headquarters—located in Midland, Michigan—to its
limits. To pave a path for the future—and toward DowDuPont’s eventual plan of breaking into three companies that focus on agriculture, materials science, and specialty products, respectively—Dow needed a new building to call home.

Windemuller was proud to play a role in bringing the new six-story, 184,000-square-foot office facility to fruition. The building will keep Dow Chemical grounded in Midland and will mean big things for the community, and for the State of Michigan as a whole, for years to come. Windemuller’s project responsibilities included the electrical layout and installation of the new modern office building. The combination of an aggressive time schedule and constant changes or additions to the project design made this job a particularly tricky one. At one point, we had to execute a complete electrical redesign of the sixth-floor executive suite, virtually on the fly. Windemuller also had to work overtime after the building was already occupied to complete a few last-minute modifications. To avoid disrupting Dow’s daily operations, our teams worked during nighttime hours on several occasions.

In addition to these logistical factors, the electrical design for the Dow Corporate Center was already complex to begin with. The project included a very complicated fixture package with more than 1,000 fixtures. Other special systems included security installations, fire alarms, room schedulers, tinted glass controls, media walls, a full-size commercial kitchen and dining room, and a spacious meeting hall. Throughout the building, Windemuller was responsible for installing and integrating cutting edge technology and controls. 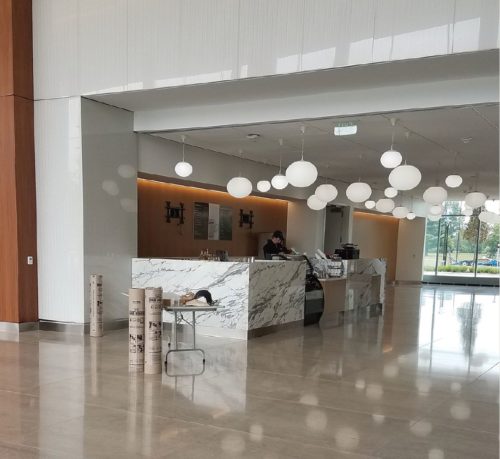 Rather than approach the project as one huge overarching effort, Windemuller ended up breaking the work up into four separate projects: the lobby level, the cafeteria area, the five-floor tenant buildout, and the sixth-floor executive suite. This division and staging helped us strategize and schedule the job in a more manageable fashion. We made extensive use of software to simplify the work and take advantage of prefabrication opportunities, including using a Bluebeam PDF editor to track and modify drawings and Trimble positioning services to verify onsite dimensions and electrical system layouts.

These strategies helped keep Windemuller agile and allowed us to meet deadlines and expectations throughout the project, in spite of the late alterations and redesigns. When Dow unveiled the new building in January 2018, we were proud to see our work helping to power one of the biggest businesses in Michigan.