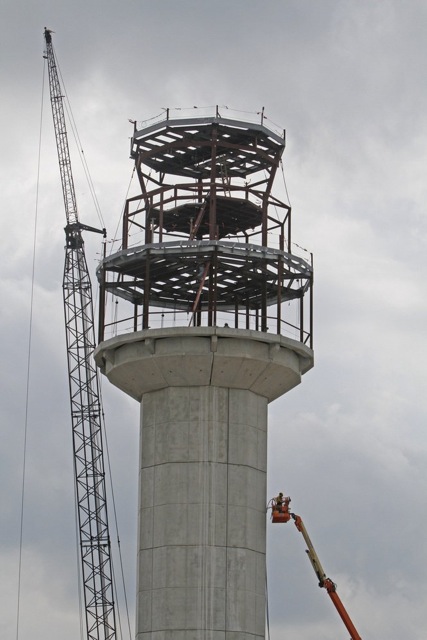 As one of 23 sub-contractors appointed by Skanska for the design and construction of the new Kalamazoo/Battle Creek airport terminal and tower, Windemuller needed to be a functional and efficient cog inside a greater machine. The marathon project, which took more than three years to complete, expanded the terminal to five gates and 59,000 square feet, and outfitted the airport with a bigger and more advanced air traffic control tower.

Having already completed airport terminals at Pellston and Grand Rapids airports, Windemuller’s professionals were more than prepared to tackle the airport terminal partnership and the sizable air traffic tower job. All told, more than 25 technicians worked on the site during the 22-month terminal project, completing their tasks on time and under budget, before moving on to the nine-month control tower phase. There are plenty of electrical contractors capable of handling projects large and small. But the Kalamazoo/Battle Creek Airport and one of the world’s largest construction management firms learned that only Windemuller was best suited to tackle large, complicated, public projects like the new airport terminal and tower.

“We had to be secure and authorized the entire time, every single day,” noted Joe Westra, a Windemuller account manager. “And it was a very big job, particularly in terms of the grounding that was put in place in, around, and below the tower itself. We worked hand-in-hand with Skanska, and it was gratifying that an international company so experienced and so large appreciated our people and professionalism.” Windemuller’s tasks were pivotal and wide-ranging:

“Windemuller was selected based on their expertise, reputation, and competitive pricing,” said Kirk Cramer Jr., Skanska’s senior project engineer. “Overall they provided a fantastic finished product, including all building power, low voltage, and technology/paging/security systems, and delivered it on time and within budget.  We would not hesitate to use Windemuller on any future projects, particularly those with tight schedule constraints and extensive coordination efforts.”